What is it? A moody hack-and-slash exploring mental illness against a backdrop of Viking and Celtic myth. Senua, Celtic warrior extraordinaire, her face and arms slathered in cerulean woad matching the color of her eyes, slices through the hordes of the Viking undead with the severed head of her dead boyfriend strapped to her belt.
PC Gamer Link to Story

Somewhere in the dark expanses between the Earth and the moon, slinking about a space station abandoned by its crew under mysterious circumstances, I found a literal skeleton in a closet. The year is 2088. The station is the Tacoma, a relay facility between Earth and a lunar resort. Something bad happened to the crew here, and Amitjyoti "Amy" Ferrier has been sent to retrieve the artificial intelligence in charge and find out what.
Motherboard Link to Story

Just How Realistic is Ubisoft's Melee Brawler 'For Honor'?

Game director Roman Campos-Oriola tells us just where history ends and fantasy begins. "We broke a shitload of swords," Roman Campos-Oriola says, laughing. Campos-Oriola, the game director for the new knights versus samurai versus vikings brawler For Honor, is telling me how he and the team at Ubisoft Montreal initially had the bright idea to use real swords for the motion capture.
Link to Story

"Reproduction Cartridges" seem like mere hacks at first glance, but to achieve quality, there's a lot of work involved. As many Americans were scrambling into stores in search of the elusive Nintendo Entertainment System: Classic Edition, 31-year-old Josh Jacobson was making his own Nintendo Entertainment System game cartridges at home with the help of a soldering iron.
Motherboard Link to Story

Ion Hazzikostas on How Blizzard Reinvigorated 'World of Warcraft' with 'Legion'

The 'WoW' game director discusses the lessons learned from 'Warlords of Draenor' and looks to the future. Exactly one year ago, Ion Hazzikostas, then assistant game director for World of Warcraft, was busy with his team designing the first bosses for the Legion expansion's Nighthold raid that just went live last Tuesday.
Link to Story

What's in a name? As much as you can cram, or so Square Enix seems to think with Kingdom Hearts HD 2.8: Final Chapter Prologue. It's a jumble that suffers somewhat for its lack of any real cohesion among its three parts, but at least two of those components are strong enough to warrant a return visit to the world that believably drops Final Fantasy and Disney characters into the same universe.
GameSpot Link to Story

I doubt anyone in the world hates ads in mobile games right now so much as Adam “B0aty” Lyne. The afternoon of December 2 found the popular British Twitch streamer on a stage in Las Vegas’ Paris Hotel, battling against Vancouver’s Ryan “Northernlion” Letourneau in a round of Pac-Man 256 on an Amazon Fire tablet.
Paste Magazine Link to Story
View More Stories

Leif Johnson (that’s “LAYF”) is a freelance game journalist whose works appear on gaming sites including IGN, Vice: Motherboard. GameSpot, PC Gamer, Official Xbox Magazine, GamesRadar, GameTrailers.com, Mac|Life, Playboy’s The Smoking Jacket, 1UP.com, GameSpy, NOWGamer, Gamezebo, and The Escapist. He’s also written video game-related work for American Cowboy magazine. Once a major figure in the cowboy poetry movement of the 1990s, he traveled across North America from Georgia to British Columbia reciting his poetry and working on ranches. Somewhere along the line he got the foolish notion that he needed to go to college, so he went to the University of Texas at Austin where he received a degree in history. He then spent three years at the University of Chicago working on his Ph.D. before realizing that he probably picked the wrong field to spend the rest of his academic career in. So now he writes about video games for a living. True story.

Leif has been playing video games since the days when Pac-Man machines were found in most corner stores, and he spent over two years in the world-class World of Warcraft raiding guild Risen on Alleria. These days, he plays on all major gaming systems, and he’s particularly proud of his “Dalaran University” T-shirt idea, which was a long-time bestseller on Jinx.com.

He also enjoys archery, photography, and medieval history. You can occasionally find his work under his full name, “Jeremiah Leif Johnson.”

Want to get in touch with him? Send him an e-mail at jeremiahleifjohnson-at-gmail.com.

Want to help him out? Buy him some stuff from his Amazon Wishlist 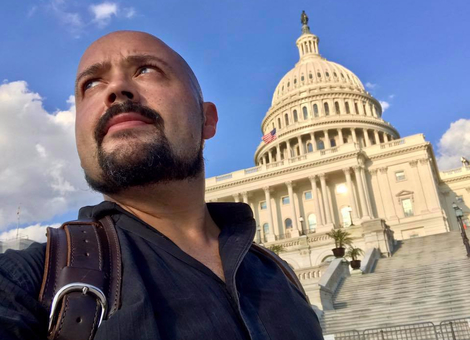